Curse of the Devil
Alpha Video 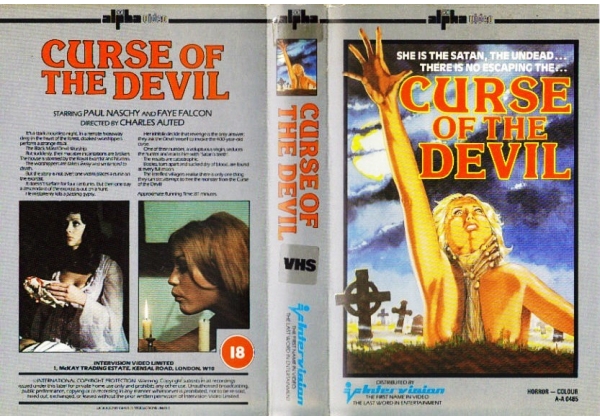 Sleeve Sypnosis:
SHE IS THE SATAN, THE UNDEAD... THERE IS NO ESCAPING THE... CURSE OF THE DEVIL
It's a stark moonless night in a remote hideaway deep in the heart of the forest, cloaked worshippers perform a strange ritual. The Black Mass! Devil worship. But suddenly, their macabre incantations are broken. The house is stormed by the Royal Exorcist and his men. The worshippers are taken away and sentenced to death. But the story is not over; one victim places a curse on the exorcist. It doesn't surface for four centuries. But then one day a descendant of the exorcist is out on a hunt.

He mistakenly kills a passing gypsy. Her kinfolk decide that revenge is the only answer; they ask the Devil himself to invoke the 400-year-old curse. One of their number, a voluptuous virgin, seduces the hunter and marks him with 'Satan's teeth'. The results are catastrophic. Bodies, torn apart and sucked dry of blood, are found at every full moon. The terrified villagers realise there is only one thing they can do; attempt to free the monster from the Curse of the Devil.

Curse of the Devil

Or find "Curse of the Devil" on VHS and DVD / BluRay at Amazon.