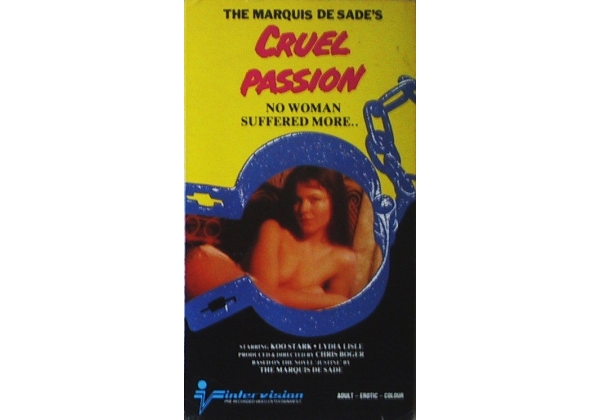 Sleeve Sypnosis:
NO WOMAN SUFFERED MORE...
Orphaned sisters Justine (KOO STARK) and Juliette (LYDIA LISLE) are left penniless and at the mercy of the nuns at the convent where they have been educated. When the Mother Superior makes it clear they can only stay if prepared to oblige the nuns, Justine, who is still a virgin, wheedles enough money out of the Mother Superior to travel to London where her cousin Pauline works in a high-class brothel. En route, the sisters meet the handsome Lord Carlisle (MARTIN POTTER), who is immediately attracted to Juliette. In London, Madame Laronde is delighted with the arrival of her two beautiful recruits. Juliette adapts quickly, but Justine takes fright and steals an ornament to pay her fare back to kindly old Pastor John.

He takes her in and feeds her, then attempts to rape her, falling to his death when he tries to pursue her. Justine next meets up with Mrs Bonny and her gang of grave-robbers. To preserve her virginity, she agrees to help them ambush a coach. They kill all the passengers except one - Lord Carlisle, who is searching for Justine, sister of his mistress, Juliette. Justine saves his life by pretending that Carlisle is her wealthy cousin, who will reward them well for sparing his life. They later escape to an inn where, in the ensuing fight, Carlisle kills one of the gang. They escape once more, still pursued by the enraged Mrs. Bonny. Pausing to rest, Carlisle is aroused by the sight of Justine's nude body. He rapes her violently leaving her bruised and bleeding as the gang catch up with him. Carlisle is torn apart by their vicious dogs. Justine is savaged, then raped by two of the gang before being tossed in the lake to drown.

Or find "Cruel Passion" on VHS and DVD / BluRay at Amazon.