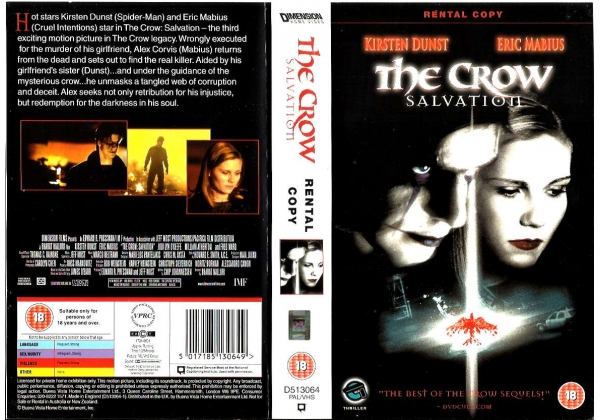 Sleeve Sypnosis:
Hot stars Kirsten Dunst (Spider-Man) and Eric Mabius (Cruel Intentions) star in The Crow: Salvation - the third exciting motion picture in The Crow legacy. Wrongly executed for the murder of his girlfriend, Alex Corvis (Mabius) returns from the dead and sets out to find the real killer. Aided by his girlfriend's sister (Dunst)...and under the guidence of the mysterious crow....he unmasks a tangled web of corruption and deceit. Alex seeks not only retribution for his injustice, but redemption for the darkness in his soul.

Or find "Crow: Salvation, The" on VHS and DVD / BluRay at Amazon.