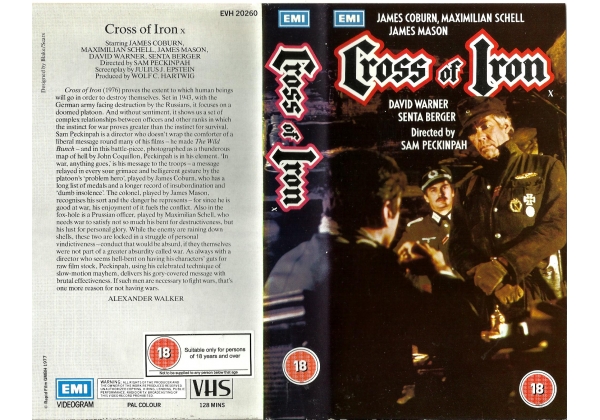 Sleeve Sypnosis:
Cross of Iron (1976) proves the extent to which human beings will go in order to destroy themselves. Set in 1943, with the German army facing destruction by the Russians, it focuses on a doomed platoon. And without sentiment, it shows us a set of complex relationships between officers and other ranks in which the instinct for war proves greater than the instinct of survival. Sam Peckinpah is a director who doesn't wrap the comforter of a liberal message round many of his films - he made The Wild Bunch - and in this battle-piece, photographed as a thunderous map of hell by John Coquillon, Peckinpah is in his element. 'In war, anything goes', is his message to the troops - a message relayed in every sour grimace and belligerent gesture by the platoon's 'problem hero', played by James Coburn, who has a long list of medals and a longer rocord of insubordination and 'dumb insolence'. The colonel, played by James Mason, recognises his sort and the danger he represents - for since he is good at war, his enjoyment of it fuels the conflict. Also in the fox-hole is a Prussian officer, palyed by Maximilian Schell, who needs war to satisfy not so much his bent for destructiveness, but his lust for personal glory. While the enemy are raining down shells, these two are locked in a struggle of personal vindictiveness - conduct that would be absurd, if they themselves were not part of a greater absurdity called war. As always with a director who seems hell-bent on having his characters' guts for raw film stock, Peckinpah, using his celebrated technique of slow-motion mayhem, delivers his gory-covered message with brutal effectiveness. If such men are necessary to fight wars, that's one more reason for not having wars.

Or find "Cross of Iron" on VHS and DVD / BluRay at Amazon.