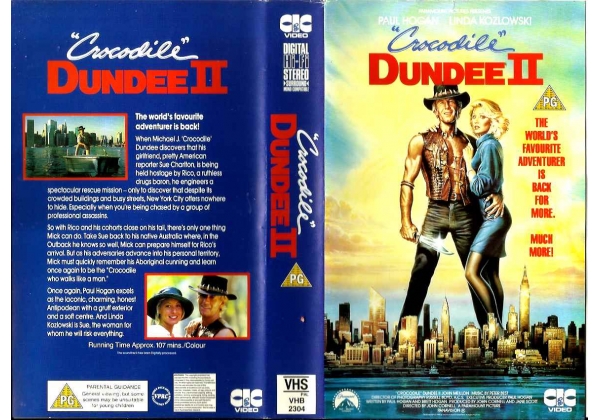 Sleeve Sypnosis:
The world's favourite adventure is back!

When Michael J. 'Crocodile' Dundee discovers that his girlfriend, pretty American reporter Sue Charlton, is being held hostage by Rico, a ruthless drugs baron, he engineers a spectacular rescue misssion-only to discover that despite its crowded buildings and busy streets, New York City offers nowhere to hide. Especially when you're being chased by a group of professional assassins.

So with Rico and his cohorts close on his tail, there's only one thing that Mick can do. Take Sue back to his native Australia where, in the outback he knows so well, Mick can prepare himself for Rico's arrival. But as his adversaries advance into his personal territory, Mick must quickly remember his Aboriginal cunning and learn once again to be the "Crocodile" walks like a man.

Once again, Paul Hogan excels as the Iconic, charming, honest Antipodean with a gruff exterior and a soft centre. And Linda Kozlowski is Sue, the for whom he will risk everything.

Or find "Crocodile Dundee II" on VHS and DVD / BluRay at Amazon.