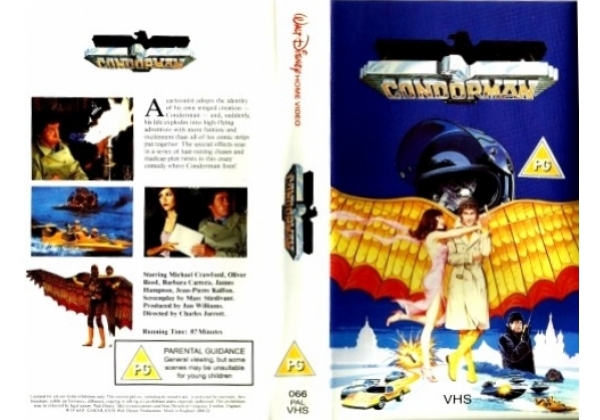 Sleeve Sypnosis:
Woodie Wilkins, a comic strip artist/writer suddenly finds himself recruited to deliver diplomatic papers to a Russian contact in Istanbul. On meeting the beautiful Russian agent, Natalia, he introduces himself by the code name of 'Condorman', one of his comic strip heroes. More by accident than by design he beats off a trio of thugs and this leads us into some incredible adventures for he is taken by the KGB as an authentic agent! In trying to help Natalia escape from Russia he employs a panoply of exciting weaponry including a gypsy truck-turned racing car-turned hydrofoil and we have a finale which includes powerful racing boats and laser cannons as we race across the bays of Monte Carlo.

Or find "Condorman" on VHS and DVD / BluRay at Amazon.