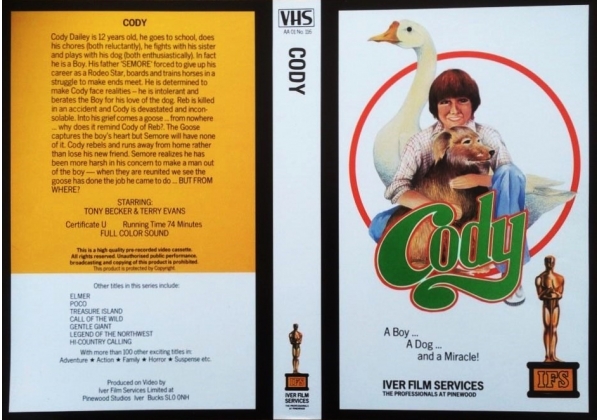 Sleeve Sypnosis:
A Boy... A Dog... and a Miracle!
Cody Dailey is 12 years old, he goes to school, does his chores (both reluctantly), he fights with his sister and plays with his dog (both enthusiastically). In fact he is a boy. His father 'SEMORE' forced to give up his career as a Rodeo Star, boards and trains horses in a struggle to make ends meet. He is determined to make Cody face realities - he is intolerant and berates the Boy for his love of the dog. Reb is killed in an accident and Cody is devastated and inconsolable. Into his grief comes a goose... from nowhere... why does it remind Cody of Reb?. The goose captures the boy's heart but Semore will have none of it. Cody rebels and runs away from home rather than lose his new friend. Semore realizes he has been more harsh in his concern to make a man out of the boy - when they are reunited we see the goose has done the job he came to do... BUT FROM WHERE?

Or find "Cody" on VHS and DVD / BluRay at Amazon.