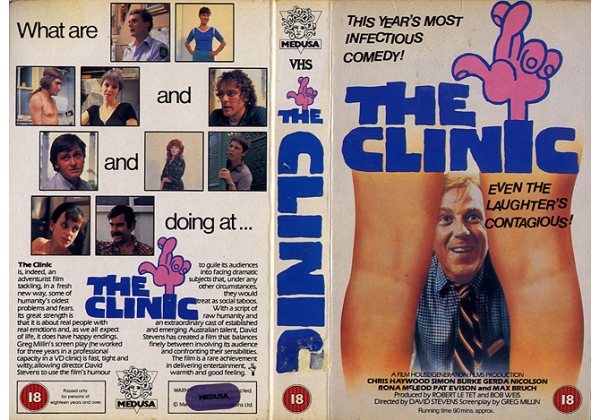 Sleeve Sypnosis:
THIS YEAR'S MOST INFECTIOUS COMEDY! EVEN THE LAUGHTER'S CONTAGIOUS!
The Clinic is, indeed, an adventurist film tackling, in a fresh new way, some of humanity's oldest problems and fears. Its great strength is that it is about real people with real emotions and, as we all expect of life, it does have happy endings. Greg Millin's screen play (he worked for three years in a professional capacity in a VD clinic) is fast, tight and witty, allowing director David Stevens to use the film's humour to guile its audiences into facing dramatic subjects that, under any other circumstances, they would treat as social taboos. With a script of raw humanity and an extraordinary cast of established and emerging Australian talent, David Stevens has created a film that balances finely between involving its audience and confronting their sensibilities. The film is a rare achievement of in delivering entertainment, warmth and good feeling.

Or find "Clinic, The" on VHS and DVD / BluRay at Amazon.