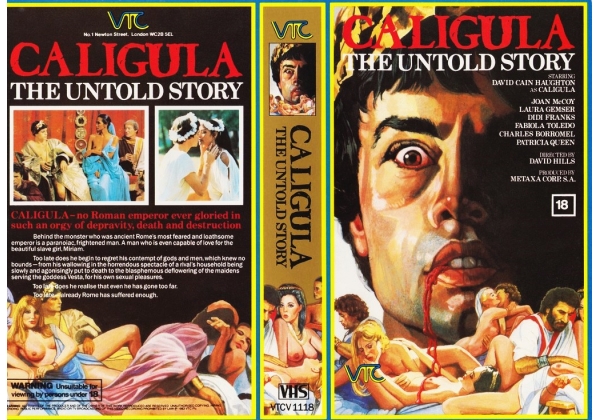 Sleeve Sypnosis:
CALIGULA - no Roman emperor ever gloried in such an orgy of depravity, death and destruction
Behind the monster who was ancient Rome's most feared and loathsome emperor is a paranoiac, frightened man. A man who is even capable of love for the beautiful slave girl, Miriam. Too late does he begin to regret his contempt of gods and men, which knew no bounds - from his wallowing in the horrendous spectacle of a rival's household being slowly and agonisingly put to death to the blasphemous deflowering of the maidens serving the goddess Vesta, for his own sexual pleasures. Too late does he realise that even he has gone too far. Too late - Rome has already suffered enough.

Or find "Caligula: The Untold Story" on VHS and DVD / BluRay at Amazon.