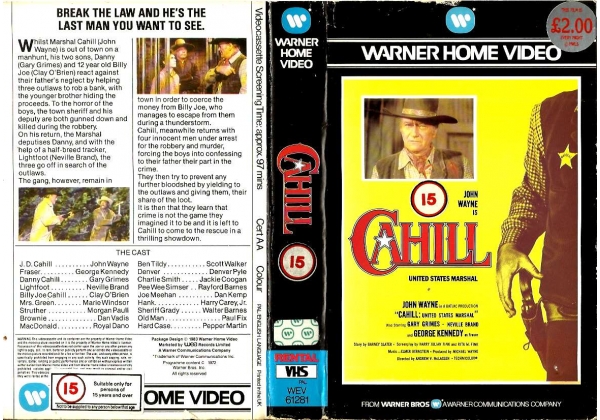 Sleeve Sypnosis:
BREAK THE LAW AND HE'S THE LAST MAN YOU WANT TO SEE.

Whilst Marshal Cahill (John Wayne) is out of town on a manhunt, his two sons, Danny (Gary Grimes) and 12 year old Billy Joe (Clay O' Brien) react against their father's neglect by helping three outlaws rob a bank, with the younger brother hiding the proceeds. To the horror of the boys, the town sheriff and his deputy are both gunned down and killed during the robbery. On his return, the Marshal deputises Danny, and with the help of a half-breed tracker, Lightfoot (Neville Brand), the three go off in search of the outlaws. The gang, however, remain in town in order to coerce the money from Billy Joe, who manages to escape from them during a thunderstorm. Cahill, meanwhile returns with four innocent men under arrest for the robbery and murder, forcing the boys into confessing to their father their part in the crime. They then try to prevent any further bloodshed by yielding to the outlaws and giving them, their share of the loot. It is then that they learn that crime is not the name of the game they imagined it to be and it is left to Cahill to come to the rescue in a thrilling showdown.

Or find "Cahill - United States Marshal" on VHS and DVD / BluRay at Amazon.