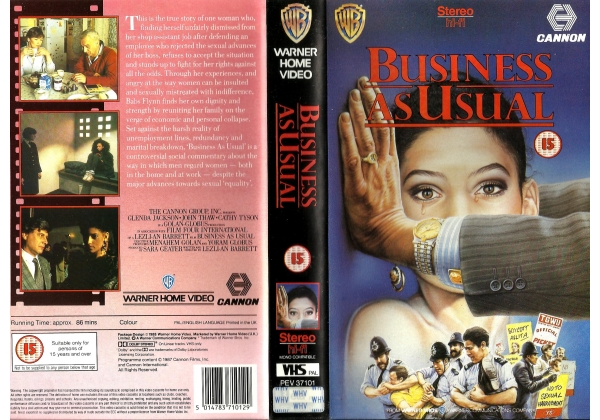 Sleeve Sypnosis:
This is the true story of one woman who, finding herself unfairly dismissed from her shop assistant job after defending an employee who rejected the sexual advances of her boss, refuses to accept the situation and stands up to the fight for her rights against all the odds. Through her experiences, and angry at the way women can be insulted and sexually mistreated with indifference, Babs Flynn finds her own dignity and strength by reuniting her family on the verge of economic and personal collapse. Set against the harsh reality of unemployment lines, redundancy and marital breakdown, "Business As Usual" is a controversial social commentary about the way in which men regard women - both in the home and at work - despite the major advances towards sexual "equality".

Or find "Business As Usual" on VHS and DVD / BluRay at Amazon.