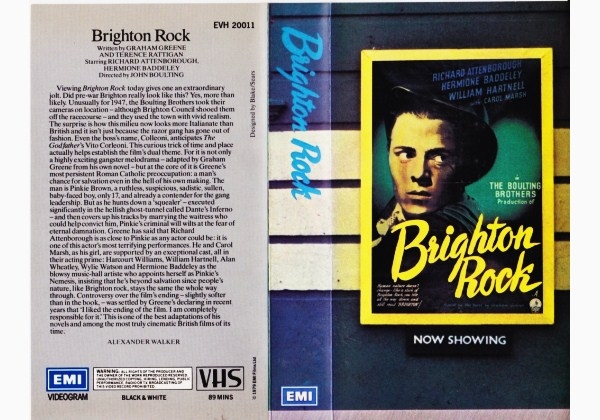 Sleeve Sypnosis:
Viewing Brighton Rock today gives one an extraordinary jolt. Did pre -war Brighton really look like this? Yes, more than likely. Unusually for 1947, the Boulting Brothers took their cameras on location - although Brighton Council shooed them off the racecourse - and they used the town with vivid realism. The surprise is how this milieu now looks more Italianate than British and it isn't just because the razor gang has gone out of fashion. Even the boss's name, Colleoni, anticipates The Godfather's Vito Corleoni. This curious trick of time and place actually helps establish the film's dual theme. For it is not only a highly exciting gangster melodrama - adapted by Graham Greene from his own novel - but at the core of it is Greene's most persistent Roman Catholic preoccupation: a man's chance for salvation even in the hell of his own making. The man is Pinkie Brown, a ruthless, suspicious. sadistic, sullen, baby-faced boy, only 17, and already a contender for the gang leadership. But as he hunts down a 'squealer' - executed significantly in the hellish ghost-tunnel called Dante's Inferno - and then covers up his tracks by marrying the waitress who could help convict him, Pinkie's criminal will wilts at the fear of eternal damnation. Greene has said that Richard Attenborough is as close to Pinkie as any actor could be: it is one of this actor's most terrifying performances. He and Carol Marsh, as his girl, are supported by an exceptional cast, all in their acting prime: Harcourt Williams, William Hartnell, Alan Wheatley, Wylie Watson and Hermione Baddeley as the blowsy music-hall artiste who appoints herself as Pinkie's Nemesis, insisting that he's beyond salvation since people's nature, like Brighton rock, stays the same the whole way through. Controversy over the film's ending - slightly softer than in the book, - was settled by Greene's declaring in recent years that 'I liked the ending of the film. I am completely responsible for it.' This is one of the best adaptations of his novels and among the most truly cinematic British films of its time.