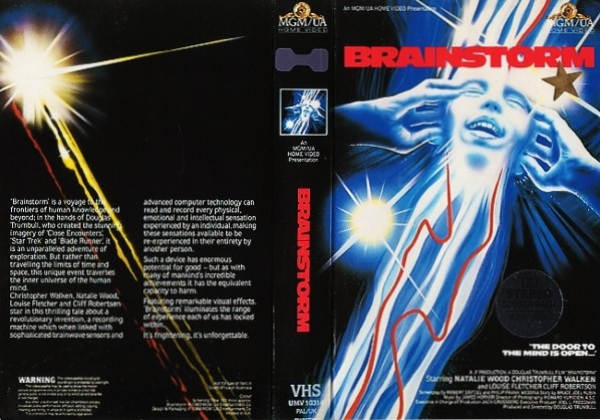 Sleeve Sypnosis:
'Brainstorm' is a voyage to the frontiers of human knowledge and beyond; in the hands of Douglas Trumball, who created the stunning imagery of 'Close Encounters', 'Star Trek' and 'Blade Runner', it is an unparalleled adventure of exploration. But rather than travelling the limits of time and space, this unique event traverses the inner universe of the human mind. Christopher Walken, Natalie Wood, Louise Fletcher and Cliff Robertson star in this thrilling tale about a revolutionary invention, a recording machine which when linked with the sophisticated brainwave sensors and advanced computer technology can read and record every physical, emotional and intellectual sensation experienced by an individual, making these sensations available to be re-experienced in their entirety by another person.

Such a device has enormous potential for good - but as with many of mankind's incredible achievements it has the equivalent capacity to do harm. Featuring remarkable visual effects, 'Brainstorm' illuminates the range of experience each of us has locked within. It's frightening, it's unforgettable.

Or find "Brainstorm" on VHS and DVD / BluRay at Amazon.