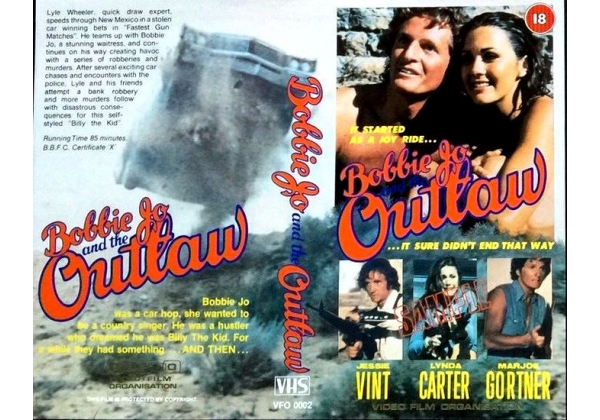 Sleeve Sypnosis:
It started as a joy ride... ...it sure didn't end that way

Lyle Wheeler, quick draw expert, speeds through New Mexico in a stolen car winning bets in "Fastest Gun Matches". He teams up with Bobbie Jo, a stunning waitress, and continues on his way creating havoc with a series of robberies and murders. After several exciting car chases and encounters with the police, Lyle and his friends attempt a bank robbery and more murders follow with disastrous consequences for this self-styled "Billy the Kid" Bobbie Jo was a car hop, she wanted to be a country singer. He was a hustler who dreamed he was Billy The Kid. For a while they had something ... AND THEN ...

Bobbie Jo and the Outlaw

Or find "Bobbie Jo and the Outlaw" on VHS and DVD / BluRay at Amazon.