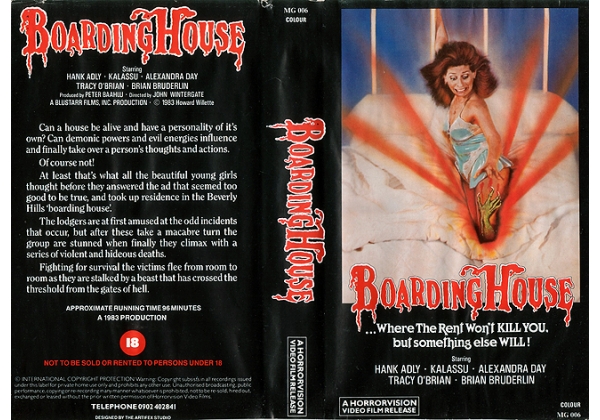 Sleeve Sypnosis:
...Where The Rent Won't KILL YOU, but something else WILL!

Can a house be alive and have a personality of it's own? Can demonic powers and evil energies influence and finally take over a person's thoughts and actions. Of course not! At least that's what all the beautiful young girls thought before they answered the ad that seemed too good to be true, and took up residence in the Beverly Hills 'boarding house'. The lodgers are at first amused at the odd incidents that occur, but after these take a macabre turn the group are stunned when finally they climax with a series of violent and hideous deaths. Fighting for survival the victims flee from room to room as they are stalked by a beast that has crossed the threshold from the gates of hell.

Or find "Boarding House" on VHS and DVD / BluRay at Amazon.