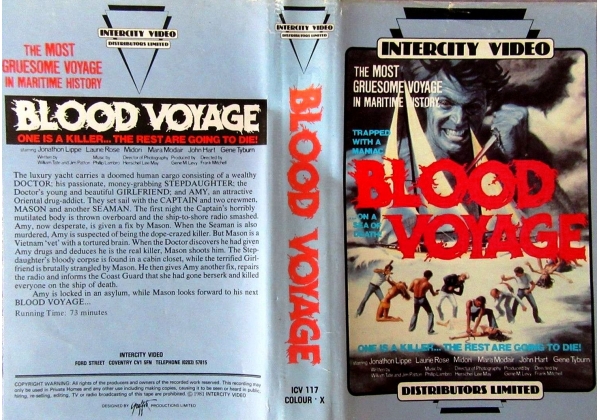 Sleeve Sypnosis:
ONE IS A KILLER... THE REST ARE GOING TO DIE!
TRAPPED WITH A MANIAC... ON A SEA OF DEATH! The luxury yacht carries a doomed human cargo consisting of a wealthy DOCTOR; his passionate, money-grabbing STEPDAUGHTER; the Doctor's young and beautiful GIRLFRIEND; and AMY, an attractive Oriental drug-addict. They set sail with the CAPTAIN and two crewmen, MASON and another SEAMAN. The first night the Captain's horribly mutilated body is thrown overboard and the ship-to-shore radio smashed. Amy, now desperate, is given a fix by Mason. When the Seaman is also murdered, Amy is suspected of being the dope-crazed killer. But Mason is a Vietnam 'vet' with a tortured brain. When the Doctor discovers he had given Amy drugs and deduces he is the real killer, Mason shoots him. The Stepdaughter's bloody corpse is found in a cabin closet, while the terrified Girlfriend is brutally strangled by Mason. He then gives Amy another fix, repairs the radio and informs the Coast Guard that she had gone berserk and killed everyone on the ship of death. Amy is locked in an asylum, while Mason looks forward to his next BLOOD VOYAGE...

Or find "Blood Voyage" on VHS and DVD / BluRay at Amazon.