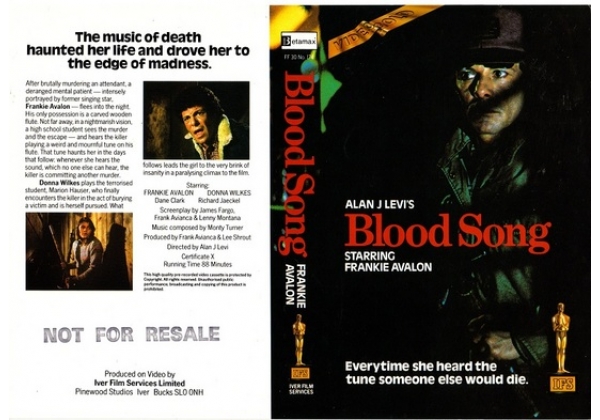 Sleeve Sypnosis:
Everytime she heard the tune someone else would die.
The music of death haunted her life and drove her to the edge of madness. After brutally murdering an attendant, a deranged mental patient - intensely portrayed by former singing star, Frankie Avalon - flees into the night. His only possession is a carved wooden flute. Not far away, in a nightmarish vision, a high school student sees the murder and the escape - and hears the killer playing a weird and mournful tune on his flute. That tune haunts haunts her in the days that follow: whenever she hears the sound, which no one else can hear, the killer is committing another murder. Donna Wilkes plays the terrorised student, Marion Hauser, who finally encounters the killer in the act of burying a victim and is herself pursued. What follows leads the girl to the brink of insanity in a paralysing climax to the film.

Or find "Blood Song" on VHS and DVD / BluRay at Amazon.