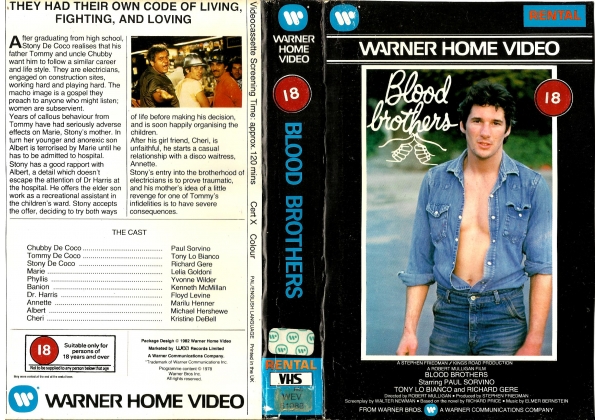 Sleeve Sypnosis:
THEY HAD THEIR OWN CODE OF LIVING, FIGHTING, AND LOVING

After graduating from high school, Stony De Coco realises that his father Tommy and uncle Chubby want him to follow a similar career and life style. They are electricians, engaged on construction sites, working hard and playing hard. The macho image is a gospel they preach to anyone who might listen; women are subservient. Years of callous behaviour from Tommy have had seriously adverse effects on Marie, Stony's mother. In turn her younger and anorexic son Albert is terrorised by Marie until he has to be admitted to hospital. Stony has a good rapport with Albert, a detail which doesn't escape the attention of Dr Harris at the hospital. He offers the elder so work as a recreational assistant in the children's ward. Stony accepts the offer, deciding to try both ways of life before making his decision, and is soon happily organising the children. After his girl friend, Cheri, is unfaithful, he starts a casual relationship with a disco waitress, Annette. Stony's entry into the brotherhood of electricians is to prove traumatic, and his mother's idea of a little revenge for one of Tommy's infidelities is to have severe consequences.

Or find "Blood Brothers" on VHS and DVD / BluRay at Amazon.