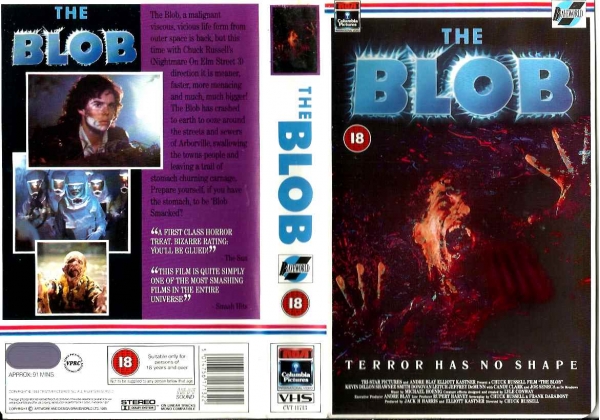 Sleeve Sypnosis:
The Blob, a malignant viscous, vicious life form from outer space is back, but this time with Chuck Russell's (Nightmare On Elm Street 3) direction it is meaner, faster, more menacing and much, much bigger! The Blob has crashed to earth to ooze around the streets and sewers of Arborville, and swallowing the towns people and leaving a trail of stomach churning carnage.

Prepare yourself, if you have the stomach, to be 'Blob Smacked'!

Additional Notes:
Listed below is the Premier Ticket issued to video rental shop owners to the premier screening of the B movie horror classic ‘ The Blob’ (1988) for its rental release in the UK. The screening was at The Metro Centre Cinema in Gateshead UK

Or find "Blob, The" on VHS and DVD / BluRay at Amazon.