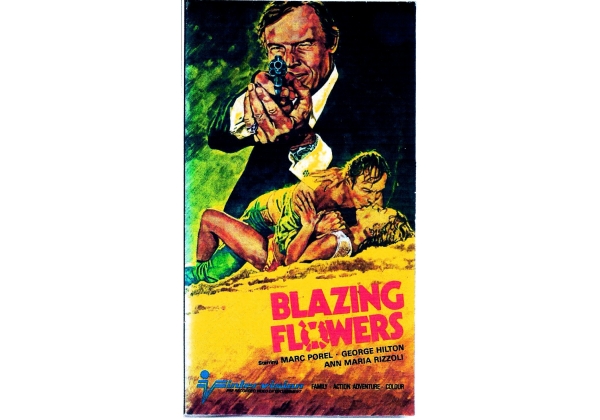 Sleeve Sypnosis:
Pino Scalise, a young Italian, is released from a six year sentence for armed robbery. Trying to go straight but his past eventually catches up with him in an old prison friend, Gazzosa, pimping for Mafia boss Don Ciccio, who tells him his sister is now a hooker. Pino is forced into driving dope across the border in order to save his girlfriend from a life of prostitution. With the dope hidden in a shipment of Don Ciccio's artificial flowers, Pino sets out on his dangerous mission, unaware that he is now under police surveillance, and that his girlfriend has escaped from her vicious protectors. Don Ciccio believes that he has been double crossed by Pino and puts out a contract on him, which almost succeeds when his car is forced off the road and crashes. With help from the police, now protecting Pino, Don Ciccio is shot and girls are freed from their slavery.

Or find "Blazing Flowers" on VHS and DVD / BluRay at Amazon.