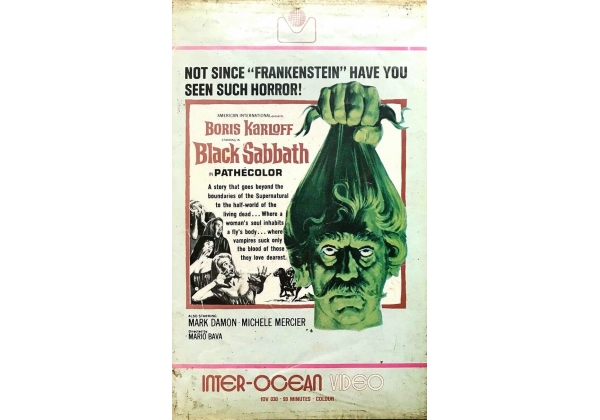 Sleeve Sypnosis:
NOT SINCE "FRANKENSTEIN" HAVE YOU SEEN SUCH HORROR!
American International's "BLACK SABBATH" tells three terrifying tales of the supernatural. In the "THE WURDALAK", a young European nobleman Vladamir (Mark Damon) comes upon a horse carrying the decapitated body a wurdalak - a vampire corpse who preys upon those he loved the most in live. Vladamir confirms his love for Sdenka (MICHELE MERCIER) whose father Gorca (BORIS KARLOFF) has become a wurdalak. In "THE DROP OF WATER", Nurse Helen Corey grumbles as she aids elderly Madame Perkins. This old woman dies of fright and Helen steals the ring from her finger. Terrified that night by the sound of dripping water, she sees the distorted ghost of Mrs. Perkins who strangles her. In "THE TELEPHONE" Rosy, a lady of the night, receives a mysterious series of telephone calls driver her to fear and distraction. When her life is threatened, she asks her friend Mary to stay until danger passes.

Or find "Black Sabbath" on VHS and DVD / BluRay at Amazon.