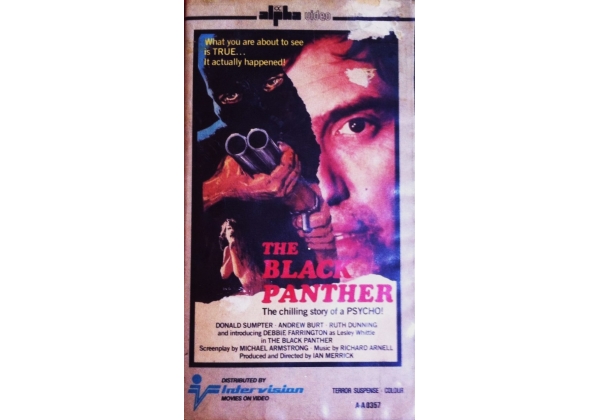 Sleeve Sypnosis:
The chilling story of a PSYCHO!
They were no ordinary armed robberies. The widespread series of vicious raids on small Post Offices, the pattern of ruthless murders, convinced the Police that they were seeking one of the most dangerous psychopaths of all time. The silent, hooded attacker who struck terror throughout the country and showed his victims no mercy came to be known as THE BLACK PANTHER. In January 1975, 17-year-old heiress Lesley Whittle was kidnapped at gunpoint and a massive ransom of £50,000 demanded; something went catastrophically wrong in delivering that ransom. Two months later, when the girl's body was found hanging in an underground shaft, police discovered clues which positively identified her abductor as the same Black Panther, now Britain's most notorious, most wanted criminal... Had he not panicked when stopped for routine questioning almost a year after the kidnapping, Donald Neilson, alias The Black Panther, might never have been caught and brought to justice... Neilson is now serving a life sentence for his heinous crimes. This film is all the more tense, all the more harrowing, because it actually happened. Everything is true..

Or find "Black Panther, The" on VHS and DVD / BluRay at Amazon.