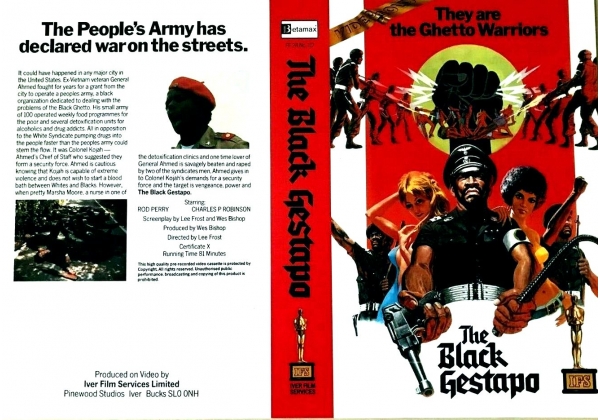 Sleeve Sypnosis:
THEY ARE THE GHETTO WARRIORS ...some call them THE BLACK GESTAPO
It could have happened in any major city in the United States. Ex-Vietnam veteran General Ahmed fought for years for a grant from the city to operate a peoples army, a black organization dedicated to dealing with the problems of the Black Ghetto. His small army of 100 operated weekly food programmes for the poor and several detoxification units for alcoholics and drug addicts. All in opposition to the White Syndicate pumping drugs into the people faster than the peoples army could stem the flow. It was Colonel Kojah - Ahmed's Chief of Staff who suggested they form a security force. Ahmed is cautious knowing that Kojah is capable of extreme violence and does not wish to start a blood bath between Whites and Blacks. However, when pretty Marsha Moore, a nurse in one of the detoxification clinics and one time lover of General Ahmed is savagely beaten and raped by two of the syndicates men, Ahmed gives in to Colonel Kojah's demands for a security force and the target is vengeance, power and THE BLACK GESTAPO.

Or find "Black Gestapo, The" on VHS and DVD / BluRay at Amazon.