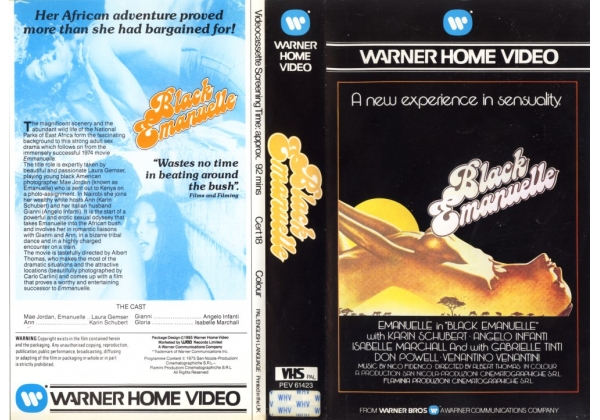 Sleeve Sypnosis:
A new experience in sensuality.
Her African adventure proved more than she had bargained for! "Wastes no time beating around the bush". Films and Filmin.g The magnificent scenery and the abundant wild life of the National Parks of East Africa form the fascinating background to this strong adult sex drama which follows on from the immensely successful 1974 movie Emmanuelle. The title role is expertly taken by beautiful and passionate Laura Gemser, playing young black American photographer Mae Jordan (known as Emanuelle) who is sent out to Kenya on a photo-assignment. In Nairobi she joins her wealthy white hosts Ann (Karin Schubert) and her Italian husband Gianni (Angelo Infanti). It is the start of a powerful and erotic sexual odyssey that takes Emanuelle into the African bush and involves her in romantic liaisons with Gianni and Ann, in a bizarre tribal dance and in a highly charged encounter on a train. The movie is tastefully directed by Albert Thomas, who makes the most of the dramatic situations and the attractive locations (beautifully photographed by Carlo Carlini) and comes up with a film that proves a worthy and entertaining successor to Emmanuelle.

Or find "Black Emanuelle" on VHS and DVD / BluRay at Amazon.