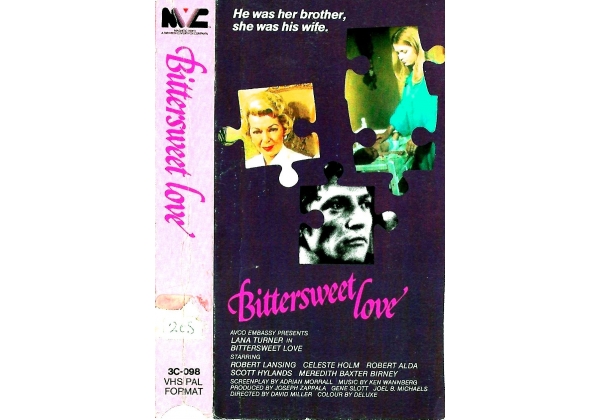 Sleeve Sypnosis:
He was her brother, she was his wife.
The story of two innocent victims and the destructive effects of a lie told in weakness, acted out in desperation, and sustained over a period of thirty years. It is interpreted by an imposing Hollywood cast - LANA TURNER, ROBERT LANSING and CELESTE HOLM. Strong support is given by ROBERT ALDA, SCOTT HYLANDS and MEREDITH BAXTER BIRNEY. Two people who love each other join together to create a new life. Only later do they discover that their child was the result of an incestuous relationship. As the title suggests, here is a poignant romantic drama with a finely etched, deeply sensitive performance from Lana Turner.

Or find "Bittersweet Love" on VHS and DVD / BluRay at Amazon.