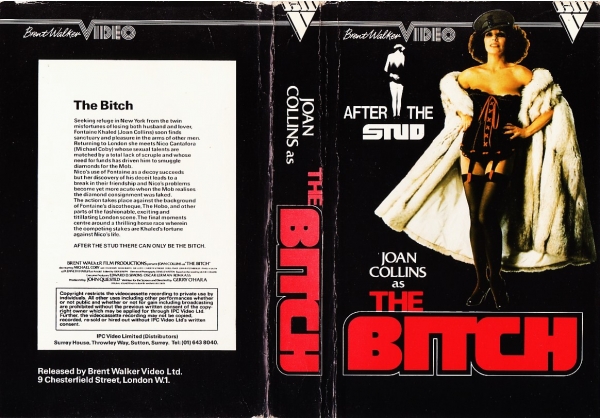 Sleeve Sypnosis:
Seeking refuge in New York from the twin misfortunes of losing both husband and lover, Fontaine Khaled (Joan Collins) soon finds sanctuary and pleasure in the arms of other men. Returning to London she meets Nico Cantafora (Michale Coby) whose sexual talents are matched by a total lack of scruples and whose need for funds has driven him to smuggle diamonds for the Mob.

Nico's use of Fontaine as a decoy succeeds but her discovery of his deceit leads to a break in their friendship and Nico's problems become yet more acute when the Mob realises the diamond consignment was faked. The action takes place against the background of Fontaine's discotheque, The Hobo, and other parts of the fashionable, exciting and titillating London scene.

The final moments centre around a thrilling horse race wherein the competing stakes are Khaled's fortune against Nico's life.

AFTER THE STUD THERE CAN ONLY BE THE BITCH

Or find "Bitch, The" on VHS and DVD / BluRay at Amazon.