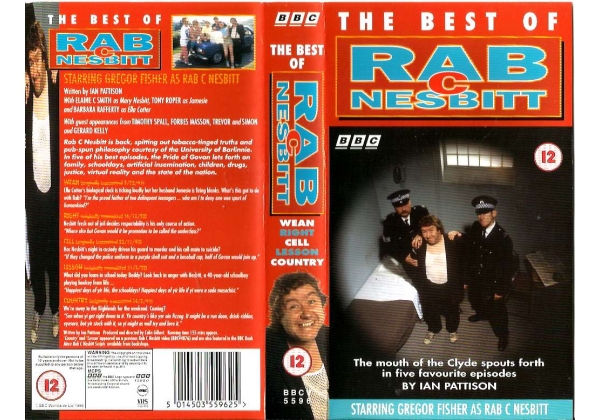 Sleeve Sypnosis:
Rab C Nesbitt is back, spitting out tobacco-tinged truths and pub-spun philosophy courtsey of the University of Barlinnie. In five of his best episodes, the Pride of Govan lets forth on family, schooldays, artificial insemination, children, drugs, justice, vertual reality and the state of the nation.

WEAN (originally transmitted 9/12/93
Ella Cotter's biological clock is ticking loudly but her husband Jamesie is firing blanks. What's this got to do with Rab? "I'm the proud faither of two delinquent teenagers... who am I to deny one wee spurt of humankind?"

RIGHT (originally transmitted 16/12/93)
Nesbitt fresh out of jail decides respectability is his only course of action. "Where else but Govan would it be promotion to be called the underclass?"

CELL (originally transmitted 23/12/93)
Has Nesbitt's night in custody driven his guard to murder and his cell-mate to suicide? "If they changed the police uniform to a purple shell suit and a baseball cap, half of Govan would join up."

COUNTRY (originally transmitted 14/5/92)
We're away to the Highlands for the weekend. Coming?
"see when yi get right down to it. Yir country's like yer ain fizzog. It might be a run doon, drink-ridden, eyesore, but yir stuck with it, so yi might as well try and love it".

Best of Rab C Nesbitt, The

Or find "Best of Rab C Nesbitt, The" on VHS and DVD / BluRay at Amazon.