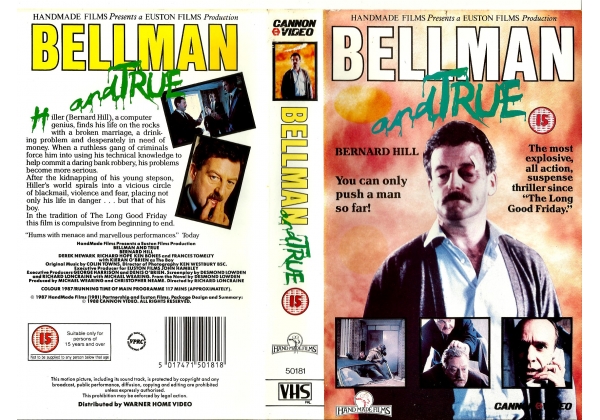 Sleeve Sypnosis:
The most explosive, all action
suspense thriller since "The Long
Good Friday."

You can only push a man so far!

Hiller (Bernard Hill), a computer genius, finds his life on the rocks with a broken marriage, a drinking problem and desperately in need of money. When a ruthless gang of criminals force him into using his technical knowledge to help commit a daring bank robbery, his problems become more serious.

After kidnapping of his young stepson, Hiller's world spirals into a vicious circle of blackmail, violence and fear, placing not only his life danger. . .but that of his boy.

In the tradition of The Long Good Friday this film is compulsive from beginning to end.

Or find "Bellman & True" on VHS and DVD / BluRay at Amazon.