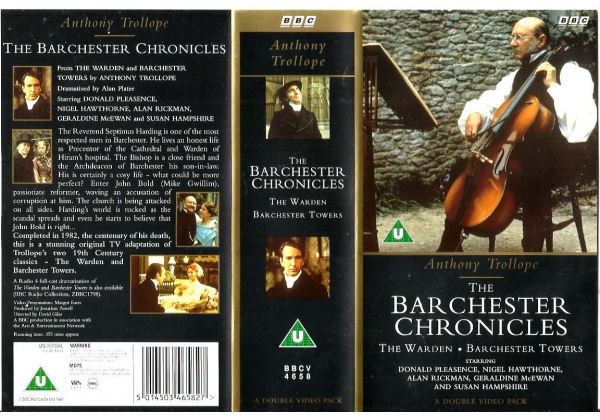 Sleeve Sypnosis:
The Reverend Septimus Harding is one of the most respected men in Barchester. He lives an honest life as Precentor of the Cathedral and Warden of Hiram's hospital. The Bishop is a close friend and Archdeacon of Barchester his son-in-law. His is certainly a cosy life - what could be more perfect? Enter John Bold (Mike Gwillim), passionate reformer, waving an accusation of corruption at him. The church is being attacked on all sides.

Harding's world is rocked as the scandal spreads and even he starts to believe that John Bold is right...

Completed in 1982, the centenary of his death, this is a stunning original TV adaptation of Trollope's two 19th Century classics - The Warden and Barchester Towers.

© A BBC production in association with
the Arts and Entertainment Network.

Or find "Barchester Chronicles, The" on VHS and DVD / BluRay at Amazon.