Babylon 5 Vol.15: The Coming of the Shadows/Gropos
Warner Home Video 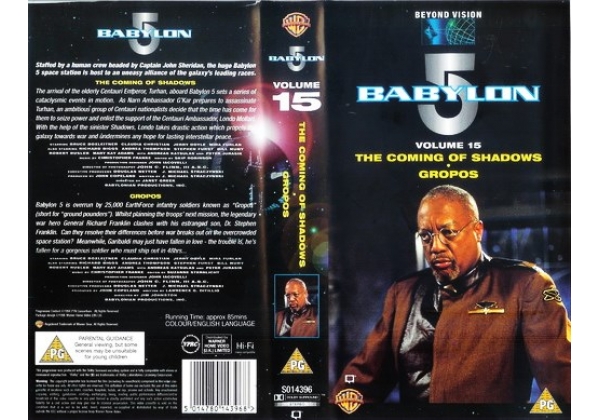 THE COMING OF SHADOWS

The arrival of the elderly Centauri Emperor, Turhan, aboard Babylon 5 sets a series of cataclysmic events in motion. As Narn Ambassador G'Kar prepares to assassinate Turhan, an ambitious group of Centauri nationalists decide that the time has come for them to seize power and enlist the support of the Centauri Ambassador, Londo Mollari. With the help of the sinister Shadows Londo takes drastic action which propels the galaxy towards war and undermines any hope for lasting interstellar peace.

Babylon 5 is overrun by 25,000 EarthForce infantry soldiers known as "Gropos" (short for "ground pounders"). Whilst planning the troops' next mission, the legendary war hero General Richard Franklin clashes with his estranged son, Dr. Stephen Franklin. Can they resolve their differences before war breaks out on the overcrowded space station? Meanwhile, Garibaldi may just have fallen in love - the trouble is, he's fallen for a gorgeous soldier who must ship out in 48hrs...

Babylon 5 Vol.15: The Coming of the Shadows/Gropos

Or find "Babylon 5 Vol.15: The Coming of the Shadows/Gropos" on VHS and DVD / BluRay at Amazon.