Babylon 5 Vol. 5.04: Secrets of the Soul/In The Kingdom of the Bl
Warner Home Video 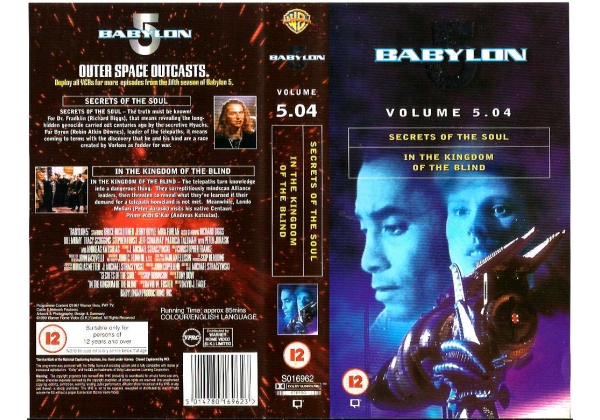 SECRETS OF THE SOUL

SECRETS OF THE SOUL - The truth must be known! For Dr. Franklin (Richard Biggs), that means revealing the long-hidden genocide carried out centuries ago by the secretive Hyachs. For Byron (Robin Atkin Downes), leader of the telepaths, it means coming to terms with the discovery that he and his kind are a race created by the Vorlons as fodder for war.

IN THE KINGDOM OF THE BLIND

IN THE KINGDOM OF THE BLIND - The telepaths turn knowledge into a dangerous thing. They surreptitously mindscan Alliance leaders, then threaten to reveal what they've learned if their demand for a telepath homeland is not met. Meanwhile, Londo Mollari (Peter Jurasik) visits his native Centauri Prime with G'Kar (Andreas Katsulas).