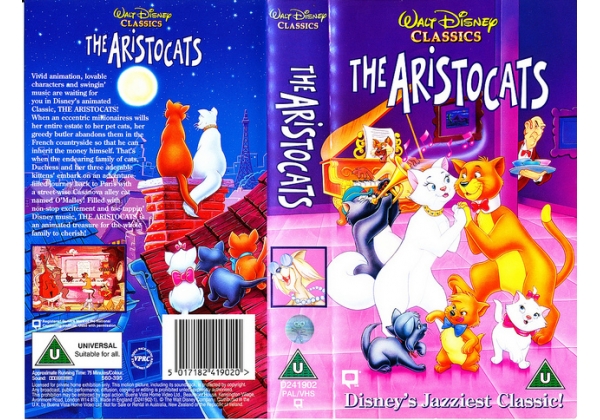 Sleeve Sypnosis:
Vivid animation, loveable characters and swingin' music are waiting for you in Disney's animated Classic, The Aristocats!

When an eccentric millionairess wills her entire estate to her pet cats, her greedy butler abandons them in the French countryside so that he can inherit the money himself. That's when the endearing family of cats, Duchess and her three adorable kittens' embark on an adventure filled journey back to Paris with a street wise Casanova alley cat named O'Malley! Filled with non-stop excitement and toe-tappin' Disney music, The Aristocats is an animated treasure for the whole family to cherish!

Or find "Aristocats, The" on VHS and DVD / BluRay at Amazon.