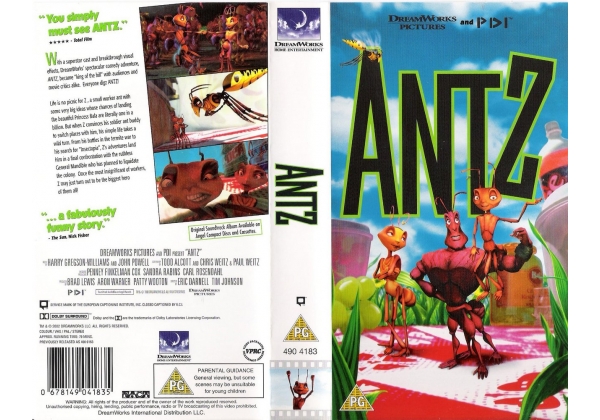 Sleeve Sypnosis:
With a superstar cast and breakthrough visual effects, DreamWorks' spectacular comedy adventure, Antz, became "king of the hill" with audiences and movie critics alike. Everyone digz Antz! Life is no picnic for Z, a small worker ant with some very big ideas whose chances of landing the beautiful Princess Bala are literally one in a billion. But when Z convinces his soldier ant buddy to switch places with him, his simple life takes a wild turn. From his battles in the termite war to his search for "Insectopia", Z's adventures land him in a final confrontation with the ruthless General Mandible who has planned to liquidate the colony. Once the most insignficant of workers, Z may just turn out to be the biggest hero of them all!

Or find "Antz" on VHS and DVD / BluRay at Amazon.