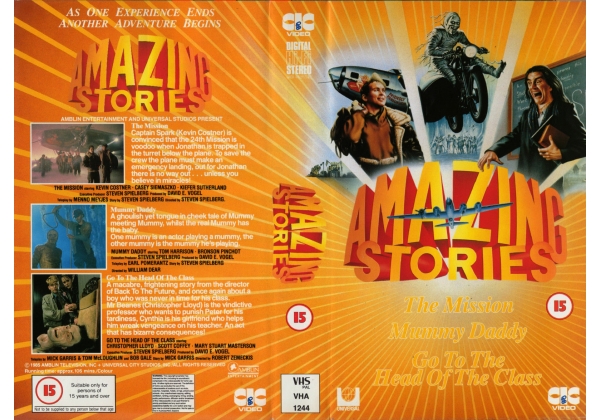 Sleeve Sypnosis:
The Mission... Capt. Spark (Kevin Costner) is convinced that the 24th Mission is voodoo when Jonathan is trapped in the turret below the plane. To save the crew of the plane must make an emergency landing, but for Jonathan there is no way out!... unless you believe in miracles!.

Mummy Daddy... A ghoulish yet tongue in cheek tale of mummy meeting mummy, whilst the real mummy has a baby. One mummy is an actor playing a mummy, the other mummy is the mummy he's playing.

Go To The Head Of The Class... A Macabre, frightening story from the director of Back To The Future, and once again about a boy who was never in time for his class. Mr Beanes (Christopher Lloyd) is the vindictive professor who wants to punish Peter for his tardiness, Cynthia is his girlfriend who helps him wreak vengeance on his teacher. An act that has bizarre consequences!.

Or find "Amazing Stories - The Mission/Mummy Daddy/Go To the Head o" on VHS and DVD / BluRay at Amazon.