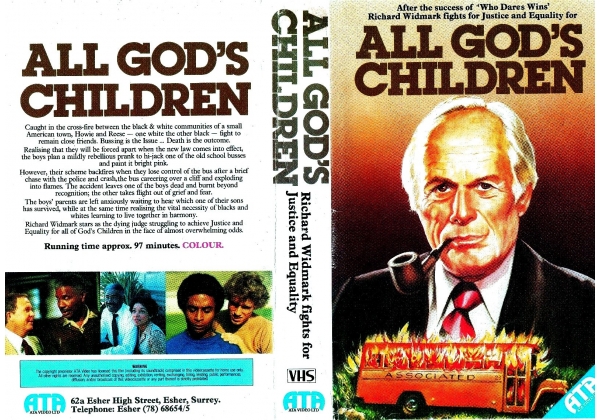 Sleeve Sypnosis:
After the success of 'Who Dares Wins' Richard Widmark fights for Justice and Equality for... ALL GOD'S CHILDREN

Caught in the cross-fire between the black & white communities of a small American town, Howie and Reese - one white the other black - fight to remain close friends. Bussing is the issue... Death is the outcome. Realising that they will be forced apart when the new law comes into effect, the boys plan a mildly rebellious prank to hi-jack one of the old school busses and paint it bright pink. However, their scheme backfires when they lose control of the bus after a brief chase with police and crash, the bus careering over a cliff and exploding into flames.

The accident leaves one of the boys dead and burnt beyond recognition; the other takes flight out of grief and fear. The boys' parents are left anxiously waiting to hear which one of their sons has survived, while at the same time realising the vital necessity of blacks and whites learning to live together in harmony. Richard Widmark stars as the dying judge struggling to achieve Justice and Equality for all of God's Children in the face of almost overwhelming odds.

Or find "All God's Children" on VHS and DVD / BluRay at Amazon.