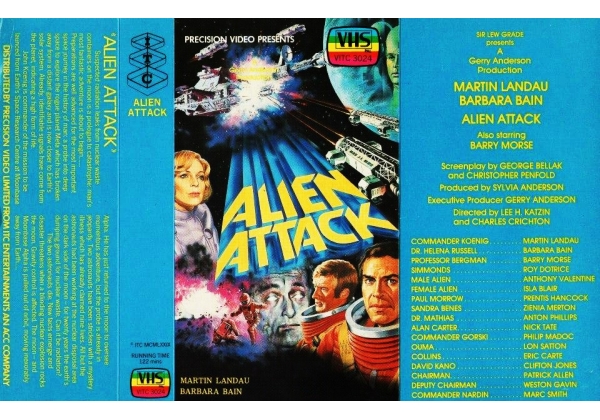 Sleeve Sypnosis:
Suspected radiation leaks from nuclear waste containers on the moon is a prologue to catastrophe: man's most fantastic adventure is about to begin....... Preparations are well advanced for the most important space journey in the history of man: a probe deep into space to explore the rogue planet Meta which has broken away from a distant galaxy and is now closer to Earth's solar system. Already, identifiable signals have come from the planet, indicating a high form of life. John Koenig is commander of the mission to be launched from Earth's Space Research Centre at Moonbase Alpha. He has just returned to the moon to oversee momentous adventure, but the probe is already in jeopardy. Two astronauts have been stricken with a mystery illness which has already claimed nine lives. All but the astronauts had been working at the nuclear disposal area on the dark side of the moon - for twenty years the earth's dumping ground for nuclear waste. Can it be radiation? The two astronauts die. New facts emerge and disaster threatens when a blinding nuclear explosion rocks the moon. Gravity control is affected. The moon - and Moonbase Alpha is pulled out of orbit, moving inexorably away from Earth.....

Or find "Alien Attack" on VHS and DVD / BluRay at Amazon.