Aladdin and the King of Thieves
Walt Disney Home Video 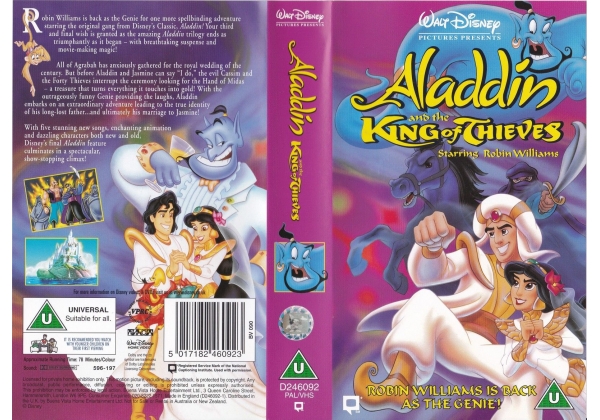 Sleeve Sypnosis:
Robin Williams is back as the Genie for one more spellbinding adventure starring the original gang from Disney's Classic Aladdin! Your third and final wish is granted as the amazing trilogy ends as triumphantly as it began - with breathtaking suspense and movie making magic!

All of Agrabah has anxiously gathered for the royal wedding of the century. But before Aladdin and Jasmine can say "I do," the evil Cassim and the Forty Thieves interrupt the ceremony looking for the Hand of Midas - a treasure that turns everything it touches into gold! With the outrageously funny Genie providing the laughs, Aladdin embarks on an extraordinary adventure leading to the true identity of his long-lost father...and ultimately his marriage to Jasmine!

Aladdin and the King of Thieves

Or find "Aladdin and the King of Thieves" on VHS and DVD / BluRay at Amazon.