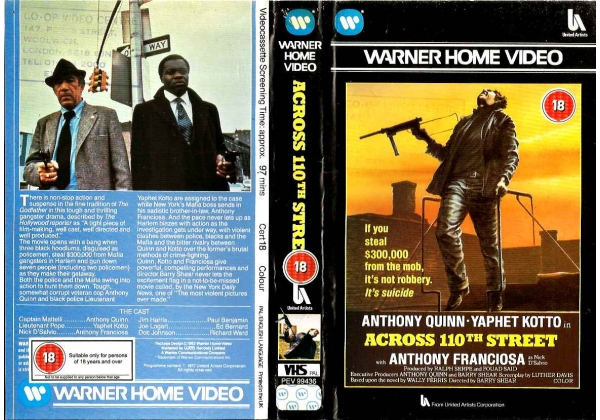 Sleeve Sypnosis:
There is non-stop action and suspense in the fine tradition of The Godfather in this tough and thrilling gangster drama, described by The Hollywood reporter as "A tight piece of film-making, well cast, well directed and well produced." The movie opens with a bang when three black hoodlums, disguised as policemen, steal $300,000 from Mafia gangsters in Harlem and gun down seven people (including two policemen) as they make their getaway. Both the police and the Mafia swing into action to hunt them down. Tough, somewhat corrupt veteran cop Anthony Quinn and black police Lieutenant Yaphet Kotto are assigned to the case while New York's mafia boss sends in his sadistic brother-in-law, Anthony Franciosa. And the pace never lets up as Harlem blazes with action as the investigation gets under way, with violent clashes between police, blacks and the Mafia and the bitter rivalry between Quinn and Kotto over the former's brutal methods of crime-fighting. Quinn, Kotto and Franciosa give powerful, compelling performances and director Barry Shear never lets the excitement flag in a not-to-be-missed movie called, by the New York Daily News, one of "The most violent pictures ever made."